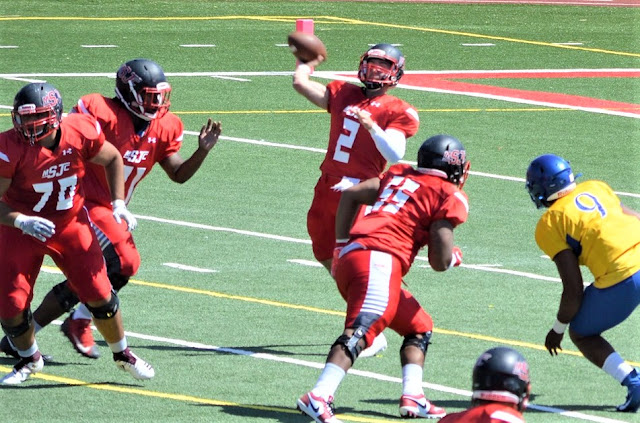 The Eagle Defense Sets the Tone Early & Dominates the Game 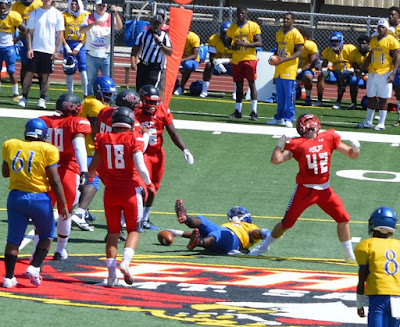 Mount San Jacinto College beat LA Southwest 58-21 in a game that was dominated by the Eagle defense Saturday. MSJC won the toss and deferred and LA scored on their first drive after a couple of breakdowns by MSJCs defense.

The Eagles defense blocked the extra point but LA recovered and passed it for the 2 point conversion. It would be their only lead of the game, 8-0. 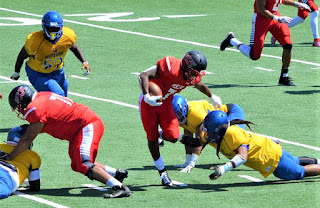 Mt Sac ran the kickoff back for a touchdown, but the score was negated by a block in the back. It would be a theme of the game, as MSJC had 4 touchdowns called back on the day.

The Eagles regrouped quickly with a 30 yd catch and run from Brett Virgil to Sherod White. The 2 point conversion tied it at 8. MSJC forced a 3 and out behind the play of linebacker Steven Bradshaw on the next drive. The offense took over and proceeded to march down the field on runs by Virgil and White. The Eagles scored a TD on a 7 yard Virgil run, making it 15-8.

Mt Sac’s tenacious defense forced another punt and the offense moved into scoring position. The drive ended when Virgil was intercepted in the endzone. The first quarter ended 15-8.

The MSJC defense continued their dominance, in the second quarter, forcing another punt. The Eagles appeared to have scored on an 80 yard pass, but it was called on a penalty.

The offense continued to struggle as the defense was shutting down the Cougars . The Eagles finally pushed the lead to 22-8 on a 7 yard pass from Virgil to Javier Luna with just over 2 minutes to go in the half.

The defense got the ball back on a Darryl Moody interception. MSJC scored again on a 21 yd pass from Virgil to CJ Sullivan. The Ben Vivanco pass to Adrian Sanchez was good for the 2 point conversion for a 30-8 halftime lead.

MSJC got the ball to start the second half and scored on the first play. A swing pass from Virgil that Luna took 64 yards for the score. The extra kick by Nicholas Sibilla made it 37-8 and sent many of the defensive starters to the bench. 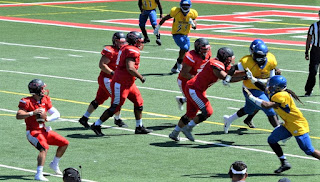 The defense continued to dominate…forcing yet another punt. MSJC had 2 more TDs called back on penalties, but the offense kept working. Virgil finally scored on a QB sneak from the one on fourth and goal, making it 44-8. That sent Virgil to the bench.

MSJC would score two more TDs on a 5 yard run by Heritage grad Sherod White and on a 7 yard Caleb Massawe run. LA scored twice against MSJCs backups in the fourth quarter for a final of 58-21.