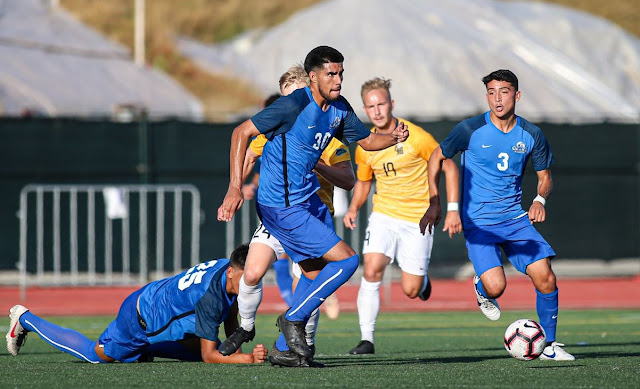 Pedro Arellano netted both of Cal State San Bernardino’s goals in two big victories away from home, and picked up the first CCAA Player of the Week distinction of the 2019 season for Sept. 2-8.

A redshirt sophomore forward, Arellano accounted for two headed goals in leading his Coyotes to a pair of 1-0 wins in Burnaby, British Columbia, Canada. The Adelanto product found the target late (76th minute) in Thursday’s triumph over MSU Billings, and then early just 1:18 into Saturday’s upset over then-13th-ranked West Region powerhouse Simon Fraser, which was unbeaten over its previous 33 home contests. CSUSB played almost an hour of that match a man short after a red card.

With his two scores, Arellano has already equaled his goal output from 2018.

“We have had some pretty memorable evenings in the last few years but this one ranks pretty high,” said head coach Darren Leslie after the defeat of the Clan to cap the trip to Canada.  “Tonight was for everyone who has been a part of our journey the last four years and to our alumni and support staff back home”.

“The level of effort and commitment from the team was first class and if they can apply themselves like that every game this season, we have a chance of doing something special. The team is smart enough to know these two games don’t mean anything if we don’t push on, and I know we will be hungry to get back to work.”

Cal State San Bernardino is idle in the week ahead. The Coyotes continue a season-opening nine-game road stretch in the Bay Area at Dominican on Thursday, Sept. 19, and Notre Dame de Namur two days later. They do not make their 2019 home debut until Thursday, Oct. 17, against preseason CCAA favorite Cal State LA.