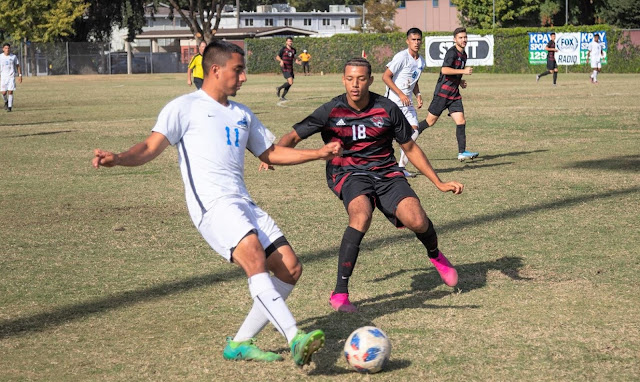 The Number 13th ranked CSUSB Coyotes won their fourth-straight match, all on the road, on Sunday afternoon at Chico State, 3-0.

The teams went to the half at zeros, but Gerardo Flores took a long throw from Brandon Sangbarani in the 51st minute for the game winner. It was Flores again, his fifth goal of the weekend, in the 58th minute off a free kick from Isaac Balderrama. In the 83rd minute Omari Mark finished Pedro Arellano’s slot pass from 12 yards out.

Each team put five shots on goal, but Jacob Huber and the Yotes’ defense allowed nothing. They have allowed just a single goal in the last four matches and pitched eight shutouts this year.

“The final score doesn’t quite reflect how close this match was, as it was a battle from start to finish,” head coach Darren Leslie said. “We were clinical in a couple key moments from set pieces and put the game away with a nice goal in transition while Chico was pushing numbers forward”.

“Outside of Gerardo having another great game, our back line and Jacob stood up to a massive test. Juan Larios was immense in the back and capped off his performance with a goal saving clearance with the game in the balance. We return now in good position to challenge for a CCAA Title and we are focused and ready for the test on Thursday.”

The Coyotes will return home with a huge NCAA Top-25 matchup against Cal State LA on Thursday at 12:30 pm. Live links are on CSUSBathletics.com.