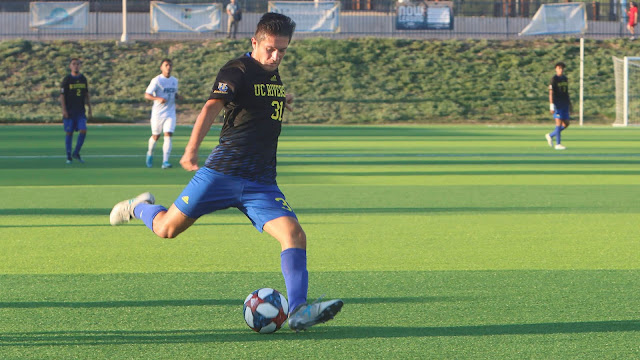 After coming up short in its last four matches, UCR earned a 1-0 bounce back win thanks to a second half goal from junior Hugo Magana Jr. and an outstanding performance from the Highlander defense.

“There are always a lot of ups and downs throughout a season, but when you get knocked down, it’s all about how you get back up,” Magana Jr. said. “We’re an amazing family, we’re a team that’s here to stay, and a team that wants to repeat. I think we showed that today.”

After 45 minutes of scoreless soccer, UCR emerged from the locker rooms with a sense of aggression and urgency. The team would get down to its attacking third a few times, but the Mustang defense held strong straddling the line of passion and chippy play. The Highlanders maintained their composure and fought through until their moment arose in the 56th minute.

Junior Federico Ucar would play a long ball down the right sideline to Magana Jr. who broke one defender before beating the Mustang keeper on a tough shot from the right side. This would be the game-winner and Magana Jr.’s second in blue and gold.

“I got a great ball from [Ucar] out wide and my teammates trusted me to put the ball in the back of the net,” Magana Jr. said. “It was an incredible feeling and a real weight lifted off our shoulders. As a family, we do everything together and celebrating that moment together with my team, our coaches, and the community was incredible. It’s what makes being a Highlander great.”

The Highlanders posted just six shots on the night compared to Cal Poly’s 18, but just one would make the difference in the match. Senior keeper Edwyn Gutierrez added another clean slate on the season posting seven saves in his shutout.

UC Riverside will look to keep the momentum going this week when the team sees a hot No. 19 UC Santa Barbara squad up in Central California, Wednesday night.