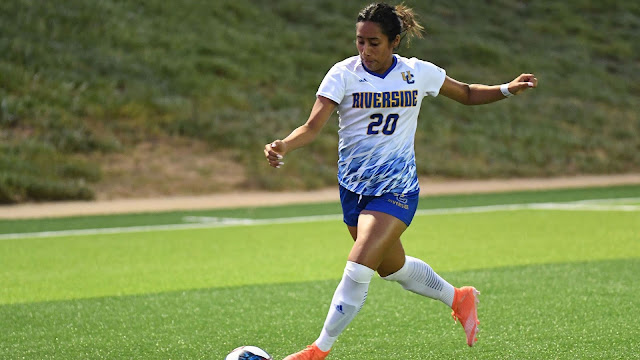 The Highlanders Look to Even Conference Record against CSUN Today

It took exactly 108 minutes to decide the UC Riverside Women’s Soccer Team’s (2-8-1, 0-1-0) conference opener Thursday night. In the end the Highlanders would drop a double overtime heartbreaker, 1-0, to UC Irvine (2-9-0, 1-0-0) with the Anteaters notching the match’s only score with just two minutes to go.

The Eaters came out determined and aggressive in the first half firing off six shots, four of which were on frame, but could not get past senior keeper Annie Bailey who collected all four saves to keep the match scoreless. UCR added three shots of its own in the first period putting two on goal.

The script was flipped in the second half with the Highlanders holding most of the possession and notching seven total shots, with three on frame to put the pressure on the UCI defense. Unfortunately the Eaters would bend but not break preserving the tie.

The two teams would breeze through the first overtime bringing about an exciting final period where each team had its opportunities. Just 17 seconds in sophomore Natza Marin was found herself with a chance at the game-winner, which she rolled through the center of the box, but it was saved by UCI keeper Maddie Newsom.

As the clock hit 108:00, UCI would find the match ending score as Alex Jaquez fired one past the Highlander defense, assisted by Scarlett Camberos and Jessica Miclat.

UCR’s 11 shots on the day were spread out among nine different Highlanders, including Marin, who tallied three, and sophomore Shanya Dhindsa, who added a pair of her own. Bailey just missed what would have been the team’s third shutout of the year, but collected six saves.