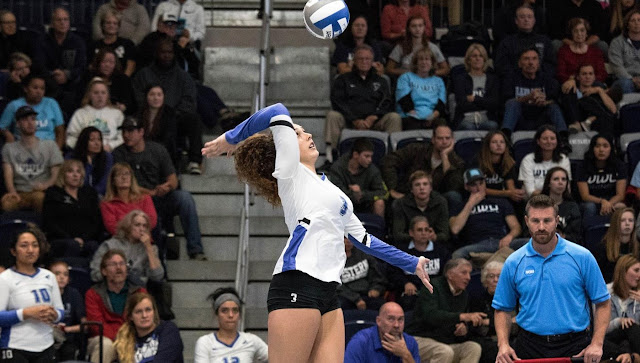 The CCAA’s 2018 Player of the Year opened the season just as she ended it, and a dominant opening weekend for Alexis Cardoza has resulted in 2019’s first CCAA Player of the Week honors.

The junior All-American outside hitter from Chino Hills led No. 2 Cal State San Bernardino to a 3-0 start including victories in two Top 10 matchups after hurricane-altered plans sent the Coyotes to the Texan Invitational to open the year.

Cardoza compiled 41 kills in the 10 sets played, leading the Coyotes in each match and averaging 4.1 kills per set. She added 45 digs along with seven blocks and four service aces on the weekend. In the match against No. 6 Minnesota Duluth, Cardoza finished with 15 kills on .300 hitting to tally 18.5 points in the 3-1 victory.

She followed that up with a tidy 12-kill, 16-dig outing against tournament hosts, No. 10 Tarleton State. For her efforts, Cardoza was named to the Texan Invitational All-Tournament Team.

“That was a really big win for our program against a very physical team that is coming off an Elite Eight appearance last season,” head coach Kim Cherniss said after the win against Tarleton State. “Overall a great result for us on a weekend that we weren’t sure we were going to be able to play at all. Can’t say enough about our hosts at Tarleton State for putting on a quality event.”

Next, the Coyotes host one of six pods of the 2019 West Region Volleyball Showcase. Cal State San Bernardino takes on Simon Fraser Thursday at 12:30 p.m., followed by an 8 p.m. nightcap against Alaska Anchorage. In Friday’s action, the squad hosts Biola at 7:30 p.m., before taking on Point Loma Saturday at 5 p.m.