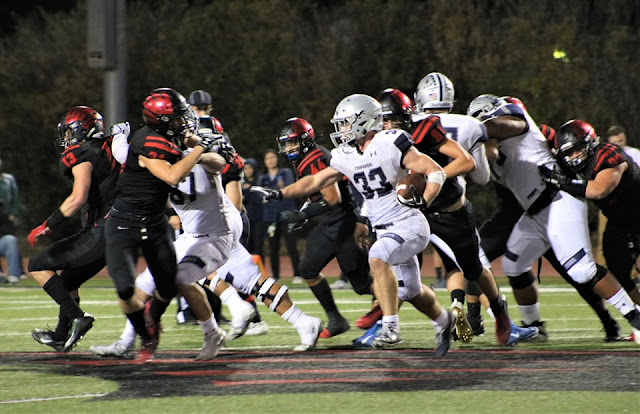 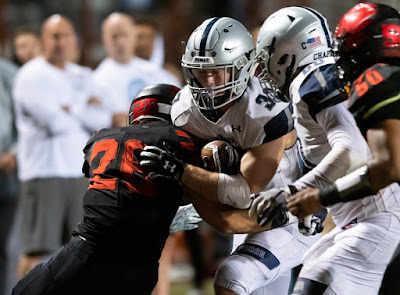 In a classic battle between the Unstoppable Force, (the MV offense), and the Immovable Object, (the Pumas Defense), the Immovable object stood strong at the end of the battle. Murrieta Valley coach George Wilson had never lost to Chaparral since taking over the Nighthawk program in 2015.

With Murrieta’s offense essentially in a stalemate against the Puma defense, it was the Puma offense that stepped up to deliver the win in last night’s hotly contested match. The Nighthawk Offense came in averaging 52 points a game and led by a gritty quarterback in sophomore Brandon Rose. In contrast, the Puma defense came in allowing 11.2 points a game and were prepared to make a statement. 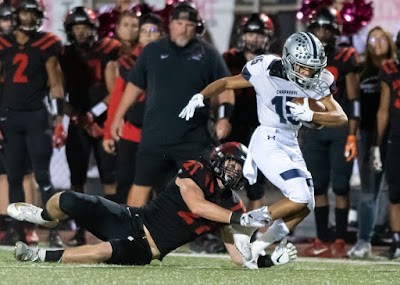 There is no love lost between teams when Southwestern league play starts it was immediately apparent. Even before the game started, the tension in the air was thick as smoke. There was so much riding on the line with the first league game and both teams trying to get a grip on the league title.

Murrieta Valley wanted to reclaim the title they lost last year to Vista Murrieta. Chaparral was ready to show they are not to be overlooked. 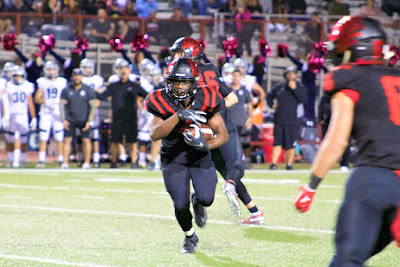 The Nighthawks started the game with a recovered onside kick which they picked up near the Chaparral 42 yard line. Out came the potent Nighthawk offense with momentum on their side. However, it was not to be . They turned the ball over to Chaparral at the Chaparral 32 yard line.

Out marched the Chaparral offense. Behind a mammoth line, the Pumas pulled off a clock draining 13 play drive culminating in a 14 yard pass from Brock White to Koby Holland for the first score of the of the night.

MV began the second drive at their 28 yard line. The Nighthawks could not move the ball on the ground and began airing out the ball. They drove down to the Chaparral 29 yard line before a holding penalty pushed them back 10 yards. They were unable to convert on the long yardage and were forced to punt the ball away. The first quarter ended Chaparral up 7-0

The second quarter began with the ball deep at their own 12 yard line. Some shifty footwork by Chaparral running back Matt Majel got the Pumas down to midfield. However, the Nighthawks were able to hold strong and forced a Puma punt.

The Pumas were able to pin the Nighthawks at their own 2 yard line later in the quarter. Without being able to run the ball Murrieta was unable to get out the shadow of their end zone and was forced to punt the ball away.

Chaparral began their ensuing drive at the MV 48 yard line. After Some tough running by Majel and Hunter Roddy along with some pin point passes by Brock White, Chaparral got in the end zone again after a 10 yard run by Roddy. 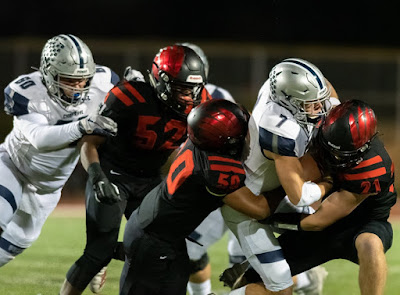 The Nighthawks began the next drive at their 37 yard line with about 2:30 minutes to go in the half. With Chaparral having a clear handle on the MV running game, Brandon Rose took in upon himself and ran to midfield. On the next play Rose hit Taliq Brown on a short pass, which brown took to the Puma 40 yard line. MV running back Corie Johnson finally found a some running room and was able to carry the down to the Puma 18 yard line. Two plays later Rose found Jack Yari on a pass across the middle of the field for the score. Chaparral received the second half kickoff, ran out the clock and went into half time up 14-7.

Chaparral began the second half by kicking the ball to the Nighthawks. Murrieta began the drive at their own 33 yard line. Two plays later Rose hit Yari running free along the right hash for a 68 yard touchdown strike.

Chaparral started their next drive at their own 19 yard line. On the first play Majel carried the ball to their 36 yard line. Two plays later  Roddy took a handoff and exploded for 55 yards along the left hash. Roddy went in for the 5 yard score on the ensuing play.

Murrieta Valley’s next drive began at their 30 yard line and the Nighthawks were relying on the pass to move the ball. At their own 45 yard line, Rose again found Yari running across the middle. Yari was able to run down to the Chaparral 30 yard line before being pushed out of bounds. 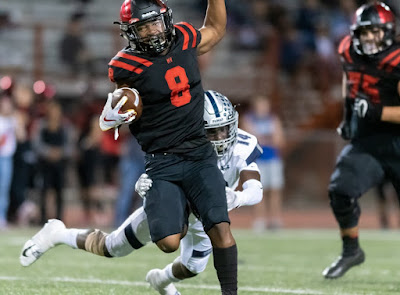 On second down Rose found Tayven Lamprey on a slant for a 10 yard gain. The Nighthawk offense stalled after a penalty and were unable to convert on downs giving the Pumas the ball at the Puma 23 yard line. During the drive on a critical third and short play at the Puma 31 yard line, Roddy took the handoff and ran up the middle 23 yards to the Nighthawk 46 yard line. Two plays later White hit Koby Holland for a 24 yard strike along the left sideline.

The Nighthawks held strong and forced Chaparral to kick a 37 yard field goal, making the score 23-14. 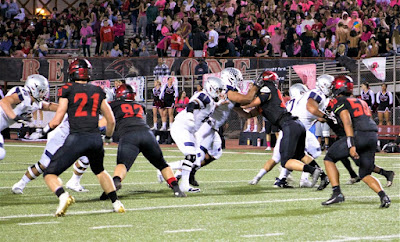 Chaparral began the 4th quarter at their 41 yard line on third down with one yard to go. Roddy was able to pick up the first down and continued the drive. A few plays later Roddy took the handoff at the 50 yard line right up the middle. Roddy hit a pile of Nighthawk defenders and continued running along the right hash for the touchdown.

Up 30-14 with 9:50 to go in the fourth quarter, the Nighthawks refused to quit. MV began the next drive at their 35 yard line. On second and 3, Rose dropped back to pass when Chaparral defensive end Chris Morales came off the edge and forced the stripped ball. The other defensive end Logan Bishop was able to scoop up the ball at the MV 30 yard line.

However, 3 plays later MV defensive lineman AJ Conrad was able to intercept a pass giving the ball back to MV at their 35 yard line. Rose did not hesitate one bit in his decision to throw to Yari on the first play, hitting him on a 30 yard play right down the middle of the field.

With the ball at the Chaparral 35 yard line on fourth down Rose dropped back to pass and hit Taliq Brown for a touchdown pass to tighten the score. Murrieta went for two but were unable to convert making the score 30-20.

A penalty after the two point play allowed MV to kick off from the Chaparral 45 yard line. MV elected to kick the ball out of the end zone giving the ball to Chaparral at the 20 yard line. The Nighthawk defense held strong and forced a Chaparral punt.

The MV offense began the drive at their 48 yard line. Two plays later Rose hit Mitch Aubrey for 34 yards down the middle of the field giving MV the ball at the Chaparral 28 yard line. On fourth and long Rose came up huge again, hitting Brown for 32 yards down the right hash. Corrie Johnson was able to dive in for the score making it 30-27 with about two minutes remaining in the game. 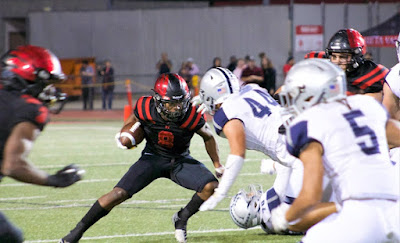 A penalty on the Nighthawks enforced on the kickoff made MV kick from their 25 yard line. They kicked deep to Chaparral’s lone returner David Monteiro who caught it at the 18 and brought it out to the Chaparral 39 yard line. Chaparral was able to run out the clock with a heavy dose of Roddy preserving the win. The final score was 30-27.

In all the Nighthawk defense was “Roddied” for over 230 yards, while the workhorse Matt Majel ran for over 100. Brock White completed 11 of 16 passes for 106 yards with a touchdown and 1 interception. 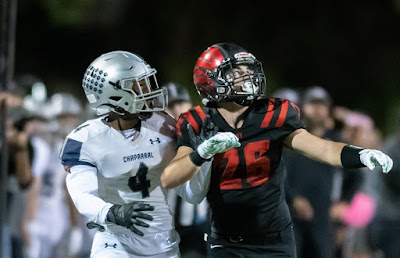