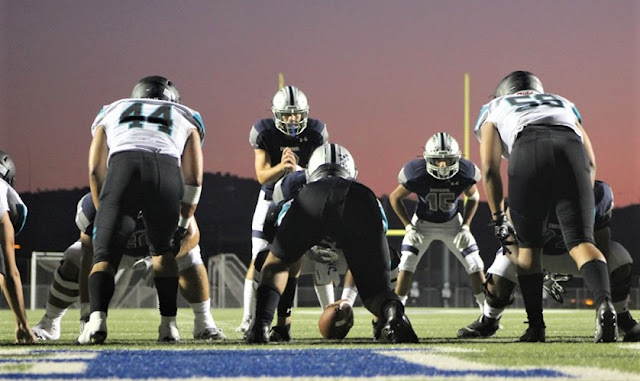 Division 3 Santiago came into Chaparral territory fresh off a 27-14 victory against Grand Terrace last week. The Sharks started the game by kicking off to Chaparral and forced them to punt early in the drive. 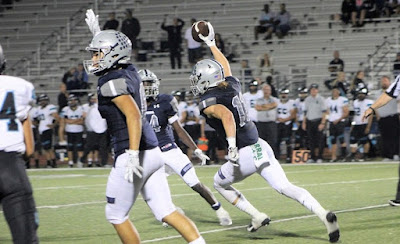 On the first play from scrimmage on their ensuing drive,Santiago fumbled the handoff . The Pumas defense quickly pounced on it at the Santiago 37 yard line for the turn over. Chaparral was not to be denied this time as Brock White ran in from the one yard line for the first score of the game.

Both teams exchanged possessions and the first quarter ended with the Pumas leading 7-0. 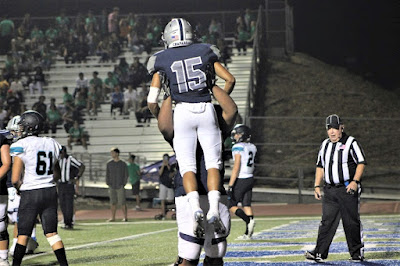 Early in the second quarter, Chaparral defensive back Christian Johnson picked off a tipped pass at the Chaparral 47 yard line and with a pride of Pumas out in front blocking, he ran it into the end zone for the second score of the game. Chaparral now led it by a score of 14-0.

The Pumas forced the Sharks to punt away on their next possession and Chaparral began the drive on their 26 yard line. Brock White began with a 21 yard run to the Chaparral 47 yard line. White showed off his arm by completing a 23 yard pass to Jake Lindemans setting them up at the Sharks 30 yard line. 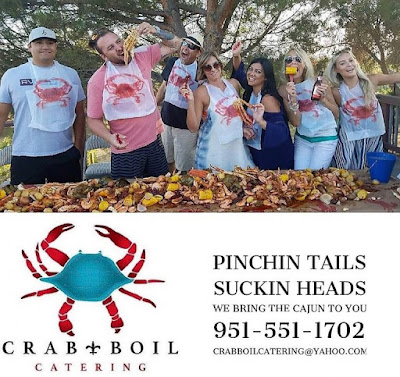 White then hit Koby Holland on a long pass giving Chaparral a first down at the Santiago 4 yard line. Chaparral running back Matt Majel capped off the drive with a sweep around the edge to make the score 21-0.

The Pumas defense forced a punt on Santiago’s next possession. However, Chaparral fumbled the ball away and Santiago took possession at the Chaparral 22 yard line. The Sharks weren’t able to move the ball, but were able to make the field goal by Jacob Marroquin as time expired on the clock. The teams went into halftime with the Pumas on top 21-3.

Santiago was determined to not go away quietly into the night.

The Sharks received the ball in the second half and drove in for the score on a touchdown pass to Aidan Koenig, making it 21-10.

Santiago kicked off to Chaparral pinning them down at the 1 yard line. The combination of White and Majel got Chaparral a bit of breathing room running it to the 11 yard line. From there, White ran 89 yards for the score bringing the total to 28-10.

Santiago began the third quarter with the ball and were threatening to score again. That is, until Chaparrals defensive linemen Chris Morales and Karson Martin both met at the quarterback for a sack making a fourth and long for Santiago. The Sharks were unable to convert and turned the ball over on down to the Pumas at the Pumas 37 yard line. 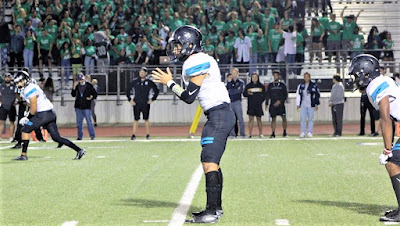 Santiago began their next drive at the Chaparral 30 yard line and three plays later Arambula connected on a long pass setting themselves up at the Chaparral 10 yard line. Sharks running back Calin Marshal was eventually able to run in for the touchdown making it 24-31.

The Pumas picked up the ensuing onside kick at their 45 yard line. They drove down to the Shark 26 when White threw a dart of a pass to Koby Holland in the end zone. Holland jumped over two Shark defenders for the spectacular catch for the touchdown making it 38-24.

Santiago took the next possession with time working against them and Arumbula came out slinging the ball. That is until Chaparral defensive back Brody Soderman picked off a deep pass to end the threat. The Pumas ran off the time and came away with the victory. Mikey Terriquez was a perfect 5 for 5 on extra points.

The Chaparral offense has really come alive in the past two weeks with Brock White, Matt Majel, Koby Holland and Jake Lindemans. Who do you stop? They will surely keep defensive

coordinators awake at night. On the other side of the ball the Defense simply flies around and plays with extreme passion. They’ve smothered every offense they’ve played to this point with one shut out.