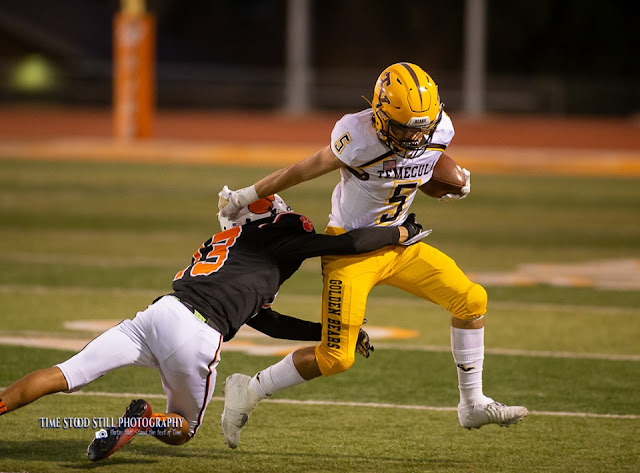 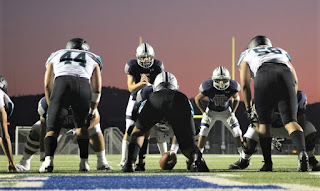 The CIF Southern Section Divisional Week four football polls have been released and five local High Schools have been ranked in the top ten in their respective Divisions.

In Division 7, Temecula Valley fell from Number Two to the fourth spot. The Golden Bears suffered their first loss of the season to San Jacinto. The Tigers are ranked 8th in Division Six and dominated Friday’s game, 41-3.

The Bears are off this week to mend their wounds and to get healthy for their Southwestern league opener against Great Oak October 3.

Also in Division 7, Elsinore is ranked seventh for the second week in a row. The Tigers are 4-1 and demolished Rancho Buena Vista 55-0 two weeks ago. Elsinore had a bye last week and will play Banning at home Friday .

Linfield Christian slipped a spot in the polls and is ranked fourth in Division 11. The Lions are now 4-0 after dominating Granite Hills 34-7 last Friday. They are off to Mission Viejo to battle 4-1 Division 8 Aliso Niguel Friday. 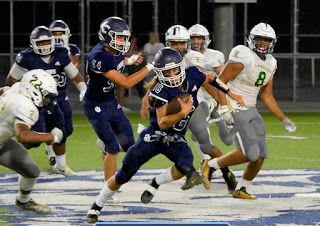 Chaparral improved it’s standings in the CIF Southern Section polls and moved up from the number 5 spot in Division 4 to fourth. The Pumas have turned the program around and are 4-0 this season.

The Pumas latest victim Santiago who they defeated 38-24 Friday. This week they are off to Hemet to take on the 3-1 Titans from Tahquitz.

Temescal Canyon broke back into the top ten after dropping to number 14 in Division 8. The Titans lost to Hillcrest 17-14 last week. They are now 2-3 and will travel Moreno Valley to play a very tough Rancho Verde team this week. 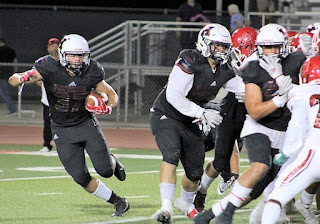 Heritage had a bye and stayed locked at number 13 spot in the Division 3 rankings this week. The Patriots dominated Redlands East Valley in a 33-10 win at home 2 weeks ago. Heritage will be playing Santiago on Thursday night. 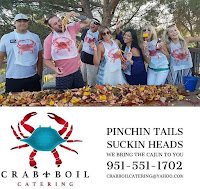 Great Oak slipped out of the the top 10 rankings this week to the 11th spot in Division 4. The Wolfpack is 3-1 and is coming off a dramatic 34-31 victory over Etiwanda two weeks ago. Great Oak will be in San Juan Capistrano to play San Juan Hills Friday.