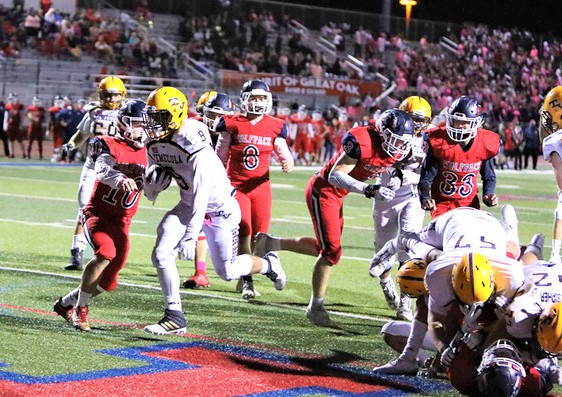 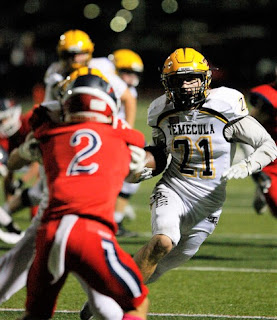 Thursday Night’s final points of the game came on a safety engineered by the Temecula Valley defense in the final minutes, as the Golden Bears dominated Great Oak to win 36-6. Making the victory even sweeter was that it was the Southwestern League opener.

Temecula bounced back from a 41-3 loss to San Jacinto two weeks ago, which Head Coach Bert Esposito blamed on injuries to key players. A bye last week helped the Bears get healthy and they pounced on the Wolfpack.

“It was nice to get everyone healthy,” Esposito said. “When we played San Jacinto half our defense was out. We started four JV guys. Brody Hughes didn’t play on defense because he was starting on offense. Dylan Johns was out. It was a long night.” 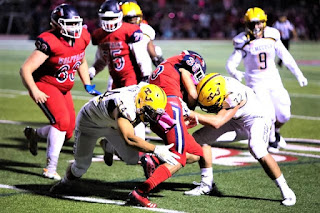 The game started slow for both teams. After a scoreless first quarter, Great Oak drew first blood on a Jalen Punsalan 2 yard run for a 6-0 lead. It would be the last time the Wolfpack would see the end zone.

Temecula Valley finally got on the board in the second quarter with under a minute to play in the half. Brody Hughes busted loose with a 30 yard run or a TD. Anson Pulsipher made the PAT and the Bears would take the lead for good 7-6.

The Bears defense stopped Great Oak and forced a punt. Pulsipher came in to kick a 46 yard field goal with time running out in the half to put Temecula ahead 10-6. 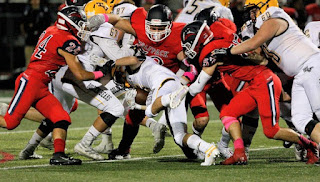 Temecula Valley scored twice in the third quarter. Dylan Johns found the end zone with a 2 yard run with 5 minutes to go. ThenHughes scored his send TD with a 7 yard scamper to make the score 23-6.

In the fourth quarter Gino Tulimero added 3 more points for Temecula when he nailed a 41 yard field goal. Blake Frazierscored a touchdown on a one yard run to make it 34-6 before the defense scored the final points with the safety.