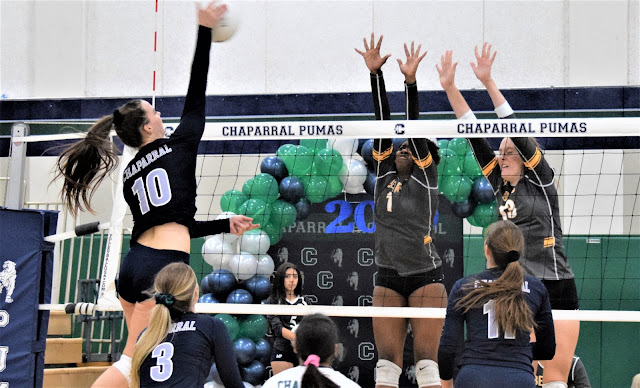 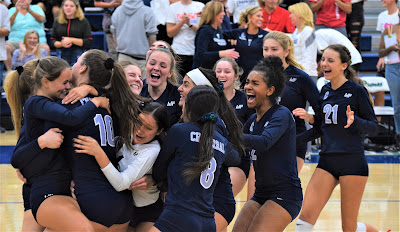 Action in the Southwestern league, one of the toughest Girls Volleyball leagues in Southern California heated up again last night. 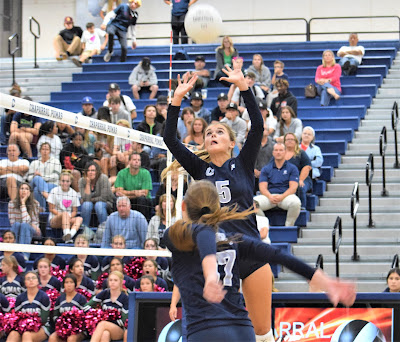 Puma sophomore Saige Rivera distributed the ball well to her hitters and kept the offense balanced. Junior Brooklyn Frederick led the team with 14 kills as Anna Johnson added 11, and Liana Woodley and Bella Rittenberg both had 7 kills a piece.

“This match was exciting and could’ve gone either way. I’m proud of my team for finishing” said Chaparral coach Gale Johnson. “When we lost to TVHS in the first round of league we learned many painful lessons. We’ve been working on specific things so we could be in a position to win”.

Senior Alondra Almaraz had a season high 34 digs. Maxeene Quiambao, also a senior had 15 digs and two service aces in game 5 that gave the Pumas the lead and the momentum to finish the match.

“The girls stepped up and made plays in pressure situations. I know they’re enjoying this victory together, and they should. They’ve put in the work. It was the perfect Senior Night. Tomorrow we’ll get back to gym and focus and finishing strong” added Coach Johnson.