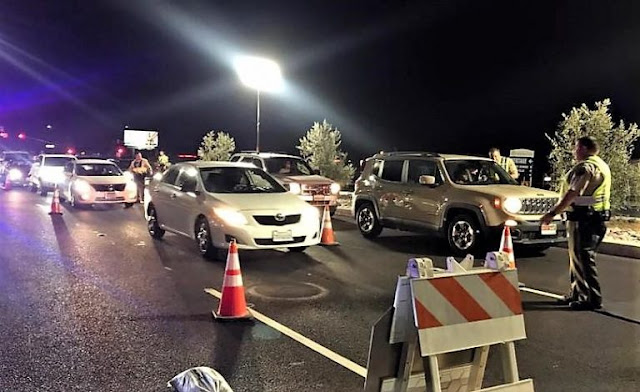 The Riverside County Sheriff’s Department, Moreno Valley Station conducted a DUI/Driver’s License checkpoint on August 23, 2019. The checkpoint was on Heacock Street and Webster Avenue between the hours of 10:00 p.m. and 2:00 a.m.

13 drivers were cited/arrested for operating a vehicle unlicensed or with a suspended/revoked license, 14 traffic citations were issued and 6 vehicles towed.

DUI Checkpoints are placed in locations based on collision statistics and frequency of DUI arrests. Last year deputies from the Moreno Valley Station investigated 75 DUI collisions that killed 2 people and injured 105 others.

Drivers caught driving impaired and charged with DUI can expect the impact of a DUI arrest to be approximately $13,500. This includes fines, fees, DUI classes, license suspension and other expenses not to mention possible jail time.

Deputies from the Moreno Valley Station remind drivers that “DUI Doesn’t Just Mean Booze.” Prescription drugs, particularly those with a driving or operating machinery warning on the label, can impair and result in a DUI. Marijuana can also be impairing, especially in combination with alcohol or other drugs.

The Moreno Valley Station will be conducting additional DUI/Driver’s License Checkpoint and/or DUI Saturation Patrols in our ongoing commitment to take suspected impaired drivers off our streets and highways, ultimately lowering the risk for deaths and injuries.

Funding for this checkpoint was provided by a grant from the California Office of Traffic Safety, through the National Highway Traffic Safety Administration.