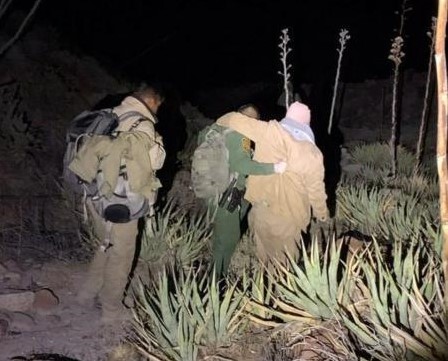 At around 10 p.m., agents received information from El Centro Sectors Radio Communications that three individuals were lost and that one of them was no longer able to walk. Agents were able to speak to one of the individuals via cell phone.

After a brief conversation, agents determined that they were in an area south of Ocotillo. This location is a mountainous region not easily accessible by vehicle.

Agents were given coordinates obtained from the callers cell phone signal and were notified that the lost individuals would light a small signal fire in order for agents to find them.

At approximately 12 a.m., MDU agents were able to see the signal fire and soon after located the individuals.

Agents on scene assessed the three men and notified BORSTAR units that one of them was suffering from leg cramps and vomiting.  BORSTAR agents arrived at the location and immediately treated the man in distress for his ailments.

“This rescue is another reminder of the risks and dangers associated with illegally crossing into the United States,” said Acting Chief Patrol Agent Ryan J. Scudder. “This lifesaving event can be attributed to the dedication and commitment of our agents who work tirelessly to protect and secure the Southwest Border.”

The three men were arrested and transported to El Centro station to be processed for illegal entry.