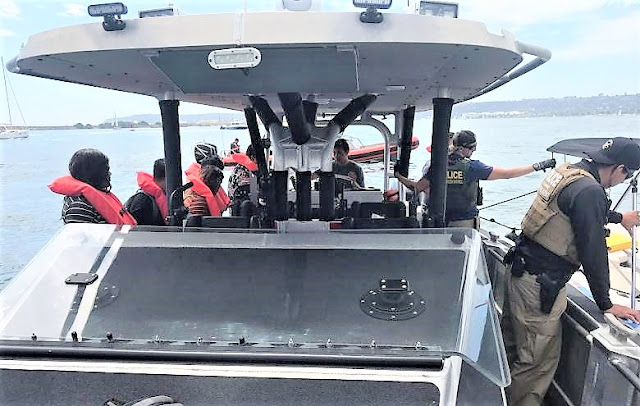 A San Diego based Air and Marine Operations (AMO) boat crew on patrol rescued 12 people on the water in two separate events within an hour of each other this Labor Day.

The first incident occurred on Monday, at around 1:20 p.m., after an Air and Marine boat crew on patrol spotted a sinking 21-foot vessel within San Diego bay.

When they arrived, they found nine people had abandoned the sinking boat and pulled all the people to the safety of their 41-foot Secure Around Flotation Equipped (SAFE) boat.

A San Diego Harbor Police (SDHP) vessel arrived on scene and the AMO crew transferred all nine persons to the SDHP vessel. The AMO commander informed the United States Coast Guard (USCG), which launched a small boat to investigate the incident. One female passenger complained about chest pains and was transferred to awaiting Emergency Medical Services.

Soon after, at around 2 pm., the AMO boat crew heard a “May Day” “call on their VHF radio which stated a vessel was on fire in the San Diego bay near the Coronado Bay Bridge. The crew arrived on scene and found an approximately 38-foot Sport Fisher boat bellowing black smoke from the engine room.

The AMO crew rescued three adults from the vessel and placed them onboard their CBP vessel. The AMO crew also fought a fire in the boats’ engine room until the San Diego Harbor Police and United States Coast Guard arrived on scene.

“I am proud of the work our Air and Marine boat crew conducted this busy Labor Day,” said Hunter Davis, Director of Air and Marine Operations in San Diego. “Their vigilance helped minimize the prospect that these events would have resulted in a tragic loss of life on the water.”

While fighting the fire a Marine Interdiction Agent and one Border Patrol agent, who was part of the AMO crew, suffered from smoke inhalation and were taken to a nearby hospital for evaluation and treatment.