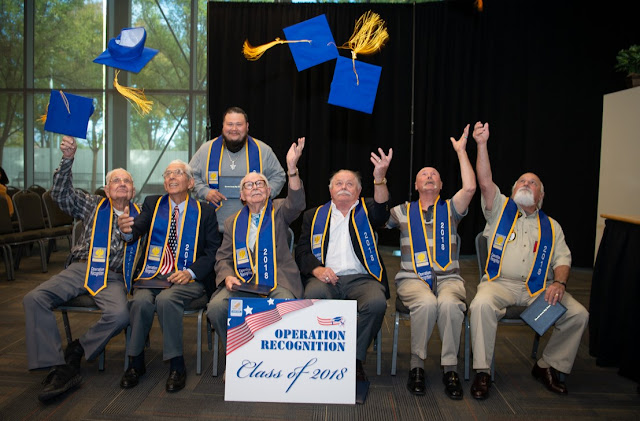 Deadline to apply for high school diploma program is October 15 for veterans from World War II, Korean War, and Vietnam War who chose service to their country over graduation caps and gowns.

They were away from home serving their country while classmates were marching in commencement ceremonies. Army, Navy, Air Force, Marines, and Coast Guard veterans who missed out on their high school graduations due to military service have until October 15 to apply for a diploma through the 2019 Operation Recognition Program.

Individuals who were interned in a Japanese-American relocation camp during World War II are also encouraged to apply.

The 2019 Operation Recognition ceremony will be held at 2 p.m. on Tuesday, November 12, at the Moreno Valley Conference and Recreation Center, 14075 Frederick Street, Moreno Valley.

In order to be recognized at the ceremony, individuals must currently reside in Riverside County. Completed application forms and supporting documentation must be received by 5 p.m., on Tuesday, October 15, 2019.

Application, forms, photos, and video from last year’s ceremony are available online on the Operation Recognition website. There is no charge to apply or participate. Applications can also be requested by telephone. Interested persons may contact Tracey Case at (951) 826-6570 or email her at tcase@rcoe.us.

The program is open to current residents of Riverside County whose high school education was interrupted by military service in World War II, the Korean War, or the Vietnam War. Degrees can also be conferred posthumously.

Press Release Provided by the Riverside County Office of Education