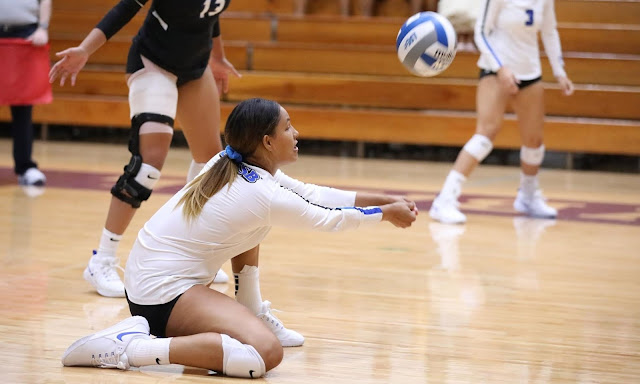 STEPHENVILLE, Texas – The CSUSB Coyotes, ranked second in the nation, made it a 3-0 Texan Invitational on Saturday with a 3-0 win over host No. 10 Tarleton State.

A run midway through and another late saw them win set one 25-19. Set two was epic as CSUSB fell behind 0-5 but fought back the whole way and made a run with Leilia To’omalatai on the serve late. They used the momentum to take set three, 25-21.

Alexis Cardoza led in kills again with 12 and Stephanie Doak had 11, hitting .333. Sascha Dominique was excellent with some huge momentum kills, as she finished with eight and Moira Murphy added to the attack with seven. CSUSB led in blocks, 14-9, and hit .298 compared to .184 for TSU.

“That was a really big win for our program against a very physical team that is coming off an Elite Eight appearance last season,” head coach Kim Cherniss said. “Stephanie Doak had a true breakout performance with some powerful kills and Leilia was awesome on defense and led that all-important charge to win the second set with a masterful job at the service line. Overall a great result for us on a weekend that we weren’t sure we were going to be able to play at all. Can’t say enough about our hosts at Tarleton State for putting on a quality event.”

Cardoza had 16 digs and To’omalatai had 18 for the Coyotes who picked up their second top-10 win of the week.

They return home to host the D2 West Region Showcase next week. The action features four matches per day for three days on the CSUSB campus. It starts at 10 am on Thursday and CSUSB plays at 12:30 pm that day against Simon Fraser. The full schedule and all follow links are on CSUSBathletics.com.