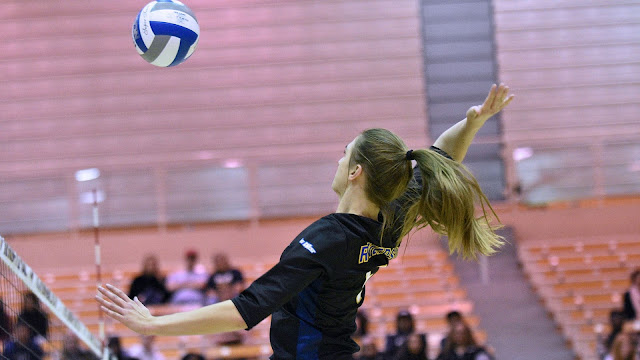 SAN FRANCISCO—The UC Riverside Women’s Volleyball Team fell in its final matchup at the USF Invitational, Saturday afternoon, dropping a five set match to a neutral opponent in Purdue Fort Wayne. The Highlanders got out to an early lead, claiming the first two sets, but could not capture any of the final three as PFW stormed back to take the match 3-2.

The first set was all Highlanders who went on a huge 20-5 run before capping off the first game 25-7. The second set would be a much closer battle, with neither team taking more than a three point lead, but again UCR outlasted PFW to take it 25-23.

The Highlanders needed just one more set heading into the break, but despite battling to the end would not find it as the Mastodons claimed set three 25-23 before edging out UCR in set four 29-27 and taking the final set 16-14. UCR saw a similar battle in the Friday’s opener with host USF and unfortunately saw the same result to end the tourney.

Junior Ayla Fresenius was at it again leading all players with 18 total kills and added 15 digs as well. Another trio of Highlanders joined her in double-digits in junior Alexis Vanlandingham (14), junior Yuliya Ushakova (11), and freshman Isabella Scarlett (11).

UC Riverside is back on the road next weekend at the GCU Invitational before returning home the following weekend for the team’s home opener.